This website, and indeed this entire school, are both dedicated to the memory of our beloved daughter, Diana. A student at Seneca Valley with a promising future, her short life came to a sudden end on July 24, 1999 as a result of a tragic automobile crash. The following is a flier that I wrote for the Regional Highway Safety Project, which is a federally funded program contracted through the Pennsylvania Department of Transportation. It is the sincere hope of our entire family that, with this school, Diana will not have died in vain, and that she will continue on to outlive all of us. 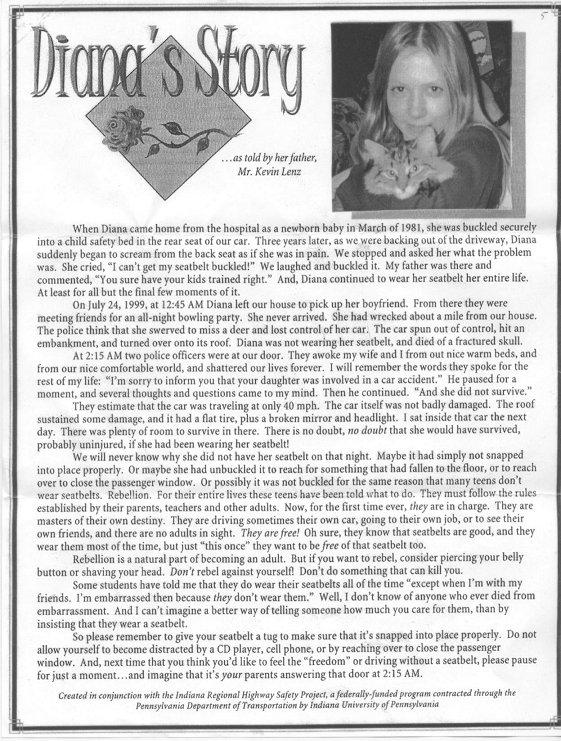 Like most parents I'd watch the news and see reports about car crashes and fatalities on the highway. I read statistics about the number of teenagers that are killed and crippled in car crashes, and like most busy people I'd shake my head and say something like "Wow, that's a shame". I may take that "extra step" and tell my kids "Hey, you better drive safely out there, okay?" And after being reassured with the standard "Sure Dad, I always do" I'd go back to watching the football game or whatever. And then my world ended one summer night when the doorbell rang at 2:15 AM, and there were two police officers standing there.

The policeman asked to speak to my wife and I together, but we had no idea what was going on. Then he said those words that I will remember for the rest of my life "I'm sorry to inform you that your daughter was in a car accident". When he paused I actually looked over his shoulder. I was thinking that maybe it had been a fender-bender and Diana would be standing there looking sheepish or something. But she wasn't standing there. What could that mean? And then he continued by saying "...and she didn't survive".

"What! What did he just say? Did I hear that correctly? Did he say that Diana didn't survive? What does that mean? No. It can't mean that! It can't mean that Diana is dead. That isn't possible. I must have heard him wrong!" But I hadn't heard him wrong. My beautiful daughter Diana was dead. Dead. I had never noticed what a final sounding word that is. It meant that I would never see my little girl again. Never.

Diana was only eighteen years old, and a senior at Seneca Valley School District. My wife and I knew that it would be Diana who would give us our first grandchild because she loved children so much. But that was not to be. Diana would never graduate from High School. She would never go to college or start a career. She would never get married, and those grandchildren will never exist, because she is...dead.

Unfortunately our family is not unique. Every year almost 10,000 teenagers are killed in car crashes, and 10,000 families must answer the doorbell to see a policeman standing there.

In November 2003 I retired after 30 years working for AT&T, and I began teaching driving safety. Now Diana and her school are saving lives. That's our business; and we do it well.

The very first interstellar message sent from planet Earth was in 1947. It was a series of powerful radio waves sent by the US Army, and designed to reflect back to us from the surface of the moon. Most of the wave actually bypassed the moon and, traveling at the speed of light, has by now reached thousands of planets. This experiment was called PROJECT DIANA.
50 years later, a remarkable woman named Diana, Princess of Wales, had a message of help and kindness that reached thousands of people, before she was killed at a young age in a tragic car crash.
Less than two years after that tragedy, Diana Marie Lenz was also killed in a tragic car crash. She was only 18 years old. Since then, her message has also reached thousands of people. D.I.A.N.A. driving school is imparting knowledge, wisdom, and judgment that will help to keep people - mostly teenagers - safe while driving. Diana and D.I.A.N.A. are making a real and positive difference for GOOD in the world, and we are very, very proud to be a part of it.
That is what Diana is. That is what D.I.A.N.A. is.
~ Kevin Lenz, Fred Tritt, Kelli Lenz